Several years ago, the Ministry of Climate Change and Environment issued a warning about certain practices that raise environmental concerns and put pressure on native biodiversity. One of these concerns is the penetration of invasive species in the waters of the UAE that has put a strain on the local marine ecosystem. A survey conducted as part of the National Programme for the Sustainability of Wildlife revealed the presence of 24 invasive flora, fauna, and other organisms in the UAE. 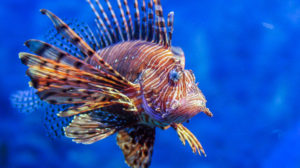 Different species of plants, animals, and microorganisms inhabit the oceans and seas. Natural barriers separate these living entities but some people have disregarded these barriers. Invasive species can be introduced in a new environment through human-related activities such as air travel, shipping, and other forms of transport.

Accidental releases of aquarium specimens and aquaculture species are also part of the problem. Some people who realize that they can’t take care of their aquatic pets anymore think that releasing their pets into the wild is the most “viable” option. Although some pet owners may have good intentions, releasing their pets into the wild is cruel. It may also be against the law in certain places. Pets are domestic animals and since they have been raised by humans, they do not have the necessary survival skills. Being in a foreign environment with no one to take care of them will likely put these creatures in imminent danger.

Whether the move from their natural habitat into new areas has been done intentionally or unintentionally, the impact can be devastating. Some introduced species do not live long in their new environment but some resilient species thrive and dominate their new area. When an introduced species flourishes in its new environment, it may not be confined to the natural controls that kept its number in check in its natural habitat. Without natural controls, there is a tendency for the new species to rapidly increase in number. When it takes over their new environment, the native species can suffer and it can harm the local biodiversity. Invasive plants and animals can compete with native species for limited resources which can alter habitats. This may ultimately endanger the existence of local species. The sudden imbalance affects natural resources in an ecosystem and puts pressure on human livelihoods. Other great risks brought about by these invaders are alien pests and pathogens which can spread diseases. 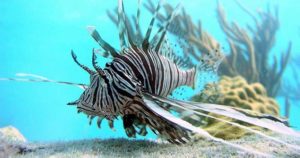 The lionfish is a stunning creature that mesmerizes us with its flamboyant spines and bright orange and red stripes. This eye-catching fish can be spotted during our deep sea diving Dubai.

The lionfish is popular among tropical fish enthusiasts. Some pet owners may have released them into the wild which led to the population surge. Despite its beauty, this species has brought havoc on ecosystems. The rapid increase in the number of lionfish is threatening coral reefs and fish populations. The lionfish has a voracious appetite and breeds all year long. According to Science Mag, a single lionfish can cause a significant decline in the number of other fishes by 79% in just 5 weeks. Researchers behind the study have witnessed this species devour parrotfish, cardinalfish, parrotfish, and damselfish. In an effort to cut down their number in the wild, some places allow removal efforts.

Scuba diving is a great method to help monitor invasive exotic marine species. Get in touch with our dive shop Dubai to know about the details.